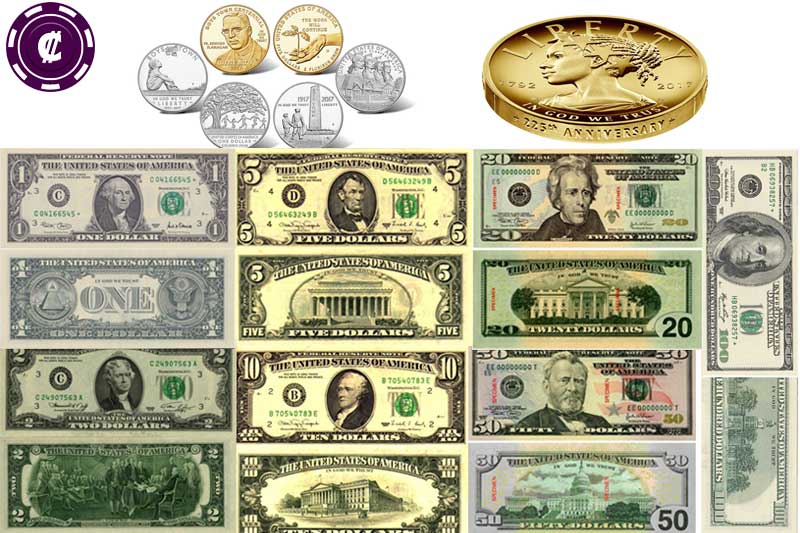 Since the suspension in 1971 of convertibility of paper U.S. currency into any precious metal, the U.S. dollar is, de facto, fiat money. As it is the most used in international transactions, the U.S. dollar is the world’s primary reserve currency. Several countries use it as their official currency, and in many others it is the de facto currency. Besides the United States, it is also used as the sole currency in two British Overseas Territories in the Caribbean: the British Virgin Islands and Turks and Caicos Islands. A few countries use the Federal Reserve Notes for paper money, while still minting their own coins, or also accept U.S. dollar coins (such as the Susan B. Anthony dollar). As of September 20, 2017, there were approximately $1.58 trillion in circulation, of which $1.53 trillion was in Federal Reserve notes (the remaining $50 billion is in the form of coins).

Overview
Article I, Section 8 of the U.S. Constitution provides that the Congress has the power “To coin money”. Laws implementing this power are currently codified at 31 U.S.C. § 5112. Section 5112 prescribes the forms in which the United States dollars should be issued. These coins are both designated in Section 5112 as “legal tender” in payment of debts. The Sacagawea dollar is one example of the copper alloy dollar. The pure silver dollar is known as the American Silver Eagle. Section 5112 also provides for the minting and issuance of other coins, which have values ranging from one cent to 100 dollars. These other coins are more fully described in Coins of the United States dollar.

The word “dollar” is one of the words in the first paragraph of Section 9 of Article I of the Constitution. There, “dollars” is a reference to the Spanish milled dollar, a coin that had a monetary value of 8 Spanish units of currency, or reales. In 1792 the U.S. Congress passed a Coinage Act. Section 9 of that act authorized the production of various coins, including “DOLLARS OR UNITS—each to be of the value of a Spanish milled dollar as the same is now current, and to contain three hundred and seventy-one grains and four sixteenth parts of a grain of pure, or four hundred and sixteen grains of standard silver”. Section 20 of the act provided, “That the money of account of the United States shall be expressed in dollars, or units… and that all accounts in the public offices and all proceedings in the courts of the United States shall be kept and had in conformity to this regulation”. In other words, this act designated the United States dollar as the unit of currency of the United States.

Unlike the Spanish milled dollar, the U.S. dollar is based upon a decimal system of values. In addition to the dollar the coinage act officially established monetary units of mill or one-thousandth of a dollar (symbol ₥), cent or one-hundredth of a dollar (symbol ¢), dime or one-tenth of a dollar, and eagle or ten dollars, with prescribed weights and composition of gold, silver, or copper for each. It was proposed in the mid-1800s that one hundred dollars be known as a union, but no union coins were ever struck and only patterns for the $50 half union exist. However, only cents are in everyday use as divisions of the dollar; “dime” is used solely as the name of the coin with the value of 10¢, while “eagle” and “mill” are largely unknown to the general public, though mills are sometimes used in matters of tax levies, and gasoline prices are usually in the form of $X.XX9 per gallon, e.g., $3.599, more commonly written as $3.59 9⁄10. When currently issued in circulating form, denominations equal to or less than a dollar are emitted as U.S. coins while denominations equal to or greater than a dollar are emitted as Federal Reserve notes (with the exception of gold, silver and platinum coins valued up to $100 as legal tender, but worth far more as bullion). Both one-dollar coins and notes are produced today, although the note form is significantly more common. In the past, “paper money” was occasionally issued in denominations less than a dollar (fractional currency) and gold coins were issued for circulation up to the value of $20 (known as the “double eagle”, discontinued in the 1930s). The term eagle was used in the Coinage Act of 1792 for the denomination of ten dollars, and subsequently was used in naming gold coins. Paper currency less than one dollar in denomination, known as “fractional currency”, was also sometimes pejoratively referred to as “shinplasters”. In 1854, James Guthrie, then Secretary of the Treasury, proposed creating $100, $50 and $25 gold coins, which were referred to as a “Union”, “Half Union”, and “Quarter Union”, thus implying a denomination of 1 Union = $100.

Series of 1917 $1 United States bill
Today, USD notes are made from cotton fiber paper, unlike most common paper, which is made of wood fiber. U.S. coins are produced by the United States Mint. U.S. dollar banknotes are printed by the Bureau of Engraving and Printing and, since 1914, have been issued by the Federal Reserve. The “large-sized notes” issued before 1928 measured 7.42 by 3.125 inches (188.5 by 79.4 mm); small-sized notes, introduced that year, measure 6.14 by 2.61 by 0.0043 inches (155.96 by 66.29 by 0.11 mm). When the current, smaller sized U.S. currency was introduced it was referred to as Philippine-sized currency because the Philippines had previously adopted the same size for its legal currency.

Dollar sign
The symbol $, usually written before the numerical amount, is used for the U.S. dollar (as well as for many other currencies). The sign was the result of a late 18th-century evolution of the scribal abbreviation “ps” for the peso, the common name for the Spanish dollars that were in wide circulation in the New World from the 16th to the 19th centuries. These Spanish pesos or dollars were minted in Spanish America, namely in Mexico City; Potosí, Bolivia; and Lima, Peru. The p and the s eventually came to be written over each other giving rise to $.

Yet another explanation suggests that the dollar sign was formed from the capital letters U and S written or printed one on top of the other. This theory, popularized by novelist Ayn Rand in Atlas Shrugged, does not consider the fact that the symbol was already in use before the formation of the United States.

History
The American dollar coin was initially based on the value and look of the Spanish dollar, used widely in Spanish America from the 16th to the 19th centuries. The first dollar coins issued by the United States Mint (founded 1792) were similar in size and composition to the Spanish dollar, minted in Mexico and Peru. The Spanish, U.S. silver dollars, and later, Mexican silver pesos circulated side by side in the United States, and the Spanish dollar and Mexican peso remained legal tender until the Coinage Act of 1857. The coinage of various English colonies also circulated. The lion dollar was popular in the Dutch New Netherland Colony (New York), but the lion dollar also circulated throughout the English colonies during the 17th century and early 18th century. Examples circulating in the colonies were usually worn so that the design was not fully distinguishable, thus they were sometimes referred to as “dog dollars”.

The U.S. dollar was first defined by the Coinage Act of 1792, which specified a “dollar” to be based in the Spanish milled dollar and of 371 grains and 4 sixteenths part of a grain of pure or 416 grains (27.0 g) of standard silver and an “eagle” to be 247 and 4 eighths of a grain or 270 grains (17 g) of gold (again depending on purity). The choice of the value 371 grains arose from Alexander Hamilton’s decision to base the new American unit on the average weight of a selection of worn Spanish dollars. Hamilton got the treasury to weigh a sample of Spanish dollars and the average weight came out to be 371 grains. A new Spanish dollar was usually about 377 grains in weight, and so the new U.S. dollar was at a slight discount in relation to the Spanish dollar.

The same coinage act also set the value of an eagle at 10 dollars, and the dollar at  1⁄10 eagle. It called for 90% silver alloy coins in denominations of 1,  1⁄2,  1⁄4,  1⁄10, and  1⁄20 dollars; it called for 90% gold alloy coins in denominations of 1,  1⁄2,  1⁄4, and  1⁄10 eagles. The value of gold or silver contained in the dollar was then converted into relative value in the economy for the buying and selling of goods. This allowed the value of things to remain fairly constant over time, except for the influx and outflux of gold and silver in the nation’s economy.

The early currency of the United States did not exhibit faces of presidents, as is the custom now; although today, by law, only the portrait of a deceased individual may appear on United States currency. In fact, the newly formed government was against having portraits of leaders on the currency, a practice compared to the policies of European monarchs. The currency as we know it today did not get the faces they currently have until after the early 20th century; before that “heads” side of coinage used profile faces and striding, seated, and standing figures from Greek and Roman mythology and composite Native Americans. The last coins to be converted to profiles of historic Americans were the dime (1946) and the Dollar (1971).

Continental currency
During the American Revolution the thirteen colonies became independent states. Freed from British monetary regulations, they each issued £sd paper money to pay for military expenses. The Continental Congress also began issuing “Continental Currency” denominated in Spanish dollars. The dollar was valued relative to the states’ currencies at the following rates:

5 shillings – Georgia
6 shillings – Connecticut, Massachusetts, New Hampshire, Rhode Island, Virginia
7 1⁄2 shillings – Delaware, Maryland, New Jersey, Pennsylvania
8 shillings – New York, North Carolina
32 1⁄2 shillings – South Carolina
Continental currency depreciated badly during the war, giving rise to the famous phrase “not worth a continental”. A primary problem was that monetary policy was not coordinated between Congress and the states, which continued to issue bills of credit. Additionally, neither Congress nor the governments of the several states had the will or the means to retire the bills from circulation through taxation or the sale of bonds. The currency was ultimately replaced by the silver dollar at the rate of 1 silver dollar to 1000 continental dollars.

Collector coins
The United States Mint produces Proof Sets specifically for collectors and speculators. Silver Proofs tend to be the standard designs but with the dime, quarter, and half dollar containing 90% silver. Starting in 1983 and ending in 1997, the Mint also produced proof sets containing the year’s commemorative coins alongside the regular coins. Another type of proof set is the Presidential Dollar Proof Set where four special $1 coins are minted each year featuring a president. Because of budget constraints and increasing stockpiles of these relatively unpopular coins, the production of new Presidential dollar coins for circulation was suspended on December 13, 2011, by U.S. Treasury Secretary Timothy F. Geithner. Future minting of such coins will be made solely for collectors.

Dollar coins
The first United States dollar was minted in 1794. Known as the Flowing Hair Dollar, contained 416 grains of “standard silver” (89.25% silver and 10.75% copper), as specified by Section 13 of the Coinage Act of 1792. It was designated by Section 9 of that Act as having “the value of a Spanish milled dollar”.