Most Common Passwords of 2017
SplashData has published its annual list of the worst passwords of the year and with a quick glance one thing is clear: we never learn. Oh, and there are a lot Star Wars fans out there.

The list is created using data from more than five million passwords that were leaked by hackers in 2017. As SplashData notes, the past two years have been particularly devastating for data security, with a number of well-publicized hacks (Equifax, Dropbox, and the SEC to name a few), attacks, ransoms, and even extortion attempts.

And yet, people continue to use easy-to-guess passwords to protect their information. For example, “123456” and “password” retain their top two spots on the list—for the fourth consecutive year. Variations of these two “worst passwords” make up six of the remaining passwords on the list. 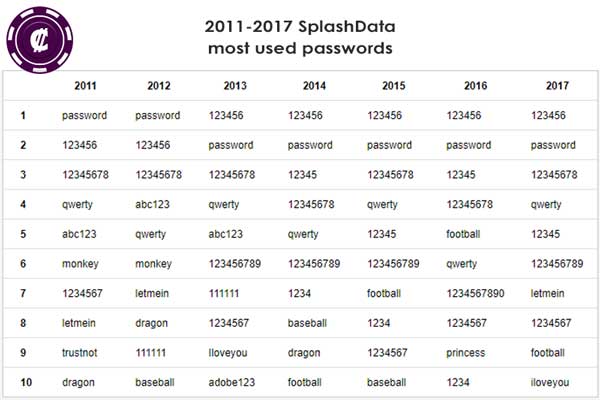 There are some newcomers, including “starwars,” which joined the list at No. 16. Other new passwords to join the list include “freedom,” “monkey” (that’s puzzler), “letmein,” and “hello.”

“Unfortunately, while the newest episode may be a fantastic addition to the Star Wars franchise, ‘starwars’ is a dangerous password to use,” said SplashData CEO Morgan Slain. “Hackers are using common terms from pop culture and sports to break into accounts online because they know many people are using those easy-to-remember words.”

SplashData (and other organizations that have collected similar data) provide the same advice year-after-year to secure their data. People should use passphrases of twelve characters or more with mixed types of characters including upper and lower cases; and they should use a different password for each website logins.

In case it isn’t clear, SplashData warns that “use of any of the passwords on this list put users at grave risk for identity theft.”

these are also very interesting

One Thought to “Most Common Passwords of 2017”