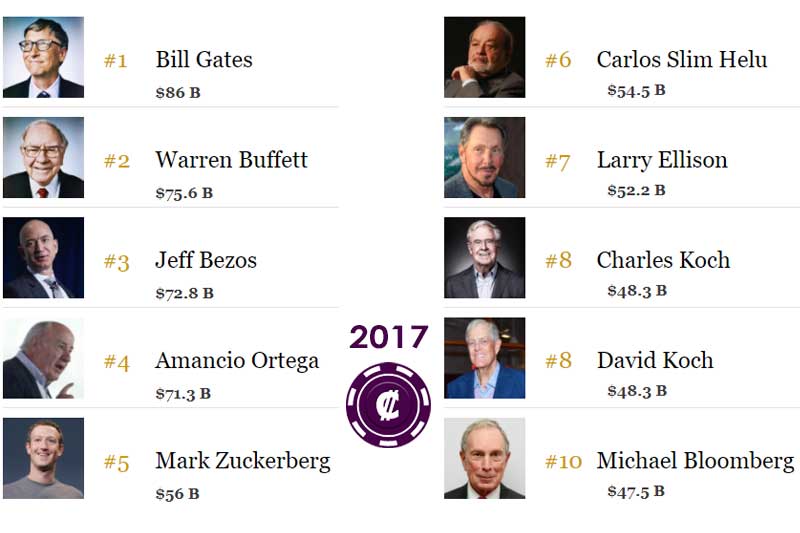 The World’s Billionaires
The World’s Billionaires is an annual ranking by documented net worth of the world’s wealthiest billionaires compiled and published in March annually by the American business magazine Forbes. The list was first published in March 1987. The total net worth of each individual on the list is estimated and is cited in United States dollars, based on their documented assets and accounting for debt. Royalty and dictators whose wealth comes from their positions are excluded from these lists. This ranking is an index of the wealthiest documented individuals, excluding and ranking against those with wealth that is not able to be completely ascertained.

According to a 2017 Oxfam report, the top eight billionaires own as much combined wealth as “half the human race”.

Methodology
Each year, Forbes employs a team of more than 50 reporters from a variety of countries to track the activity of the world’s wealthiest individuals. Preliminary surveys are sent to those who may qualify for the list. According to Forbes, they received three types of responses – some people try to inflate their wealth, others cooperate but leave out details, and some refuse to answer any questions. Business deals are then scrutinized and estimates of valuable assets – land, homes, vehicles, artwork, etc. – are made. Interviews are conducted to vet the figures and improve the estimate of an individual’s holdings. Finally, positions in a publicly traded stock are priced to market on a date roughly a month before publication. Privately held companies are priced by the prevailing price-to-sales or price-to-earnings ratios. Known debt is subtracted from assets to get a final estimate of an individual’s estimated worth in United States dollars. Since stock prices fluctuate rapidly, an individual’s true wealth and ranking at the time of publication may vary from their situation when the list was compiled.

Family fortunes dispersed over a large number of relatives are included only if those individuals’ holdings are worth more than a billion dollars. However, when a living individual has dispersed his or her wealth to immediate family members, it is included under a single listing provided that individual is still living. Royal familys and dictators that have their wealth contingent on a position are always excluded from these lists.

Annual rankings
The rankings are published annually in March, so the net worth listed are snapshots taken at that time. These lists only show the top 10 wealthiest billionaires.

2017
On the 30th anniversary of the Forbes’ list of the world’s billionaires, for the fourth year in a row, Bill Gates was named the richest man in the world. The number of billionaires increased 13% to 2,043 from 1,810 in 2016; this is the biggest change in over 30 years of tracking billionaires globally. This is the first time after 12 years that Carlos Slim was not within the top five. The U.S. continues to have the most billionaires in the world, with a record of 565. China has 319 (not including Hong Kong or Macau), Germany has 114, and India has the fourth most with 101; India has reached over 100 billionaires for its first time.